2011 Seminars you must attend!

Well, I received an email from my friend and fellow martial artist Eric Parsons of Blue River Martial Arts.  Eric has been host to a couple of great martial arts seminars over the last two years.  First we had Kris Wilder of West Seattle Karate come and teach in Spring 2009.  Then in the Spring of 2010 we had Rory Miller of Chiron Training.  Again it was a fantastic seminar and I learned things far more valuable than just the martial arts from both of them.  The details have been and will be the subject of other blog entries.  Needless to say that given the opportunity I would go study with both of these gentleman again in a heartbeat.

Little bit more background:  In August of 2010 Kris Wilder hosted the United States side of the Martial Art Expo.  A seminar series that had some of the biggest martial arts names in the world teach both here and in the United Kingdom.  The instructors included Iain Abernethy, Al Peasland, Kris Wilder, Rory Miller, Marc "Animal" MacYoung, and Nicholas Yang.  The trip to Seattle was wonderful all by itself but the seminar made it that much better.  We had a great time and I enjoyed meeting all of the guys in the seminar.  I hope with some small changes to the order of things that we can do something like that again.

All this brings me to the main point of the article.  Eric is currently working on the details of hosting two seminars next year.  Nicholas Yang on April 1st and 2nd and Iain Abernethy October 7th through the 9th.  As mentioned above I worked with both of them at the Martial Arts Expo and I am really looking forward to these next seminars. 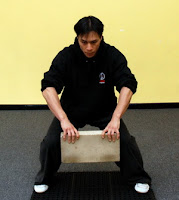 Nicholas Yang, was great to work with and obviously very knowledgeable about the martial arts.  Having grown up with Dr. Yang, Jwing Ming as a father could not have been easy at times but the evidence that both are great martial artists was demonstrated to me at the martial arts expo.  The focus of the material for this seminar is going to be Chin Na, White Crane Kung Fu, and Shuai Chiao.  For me with a Karate and Aikijutsu background I am hoping that I can use these Chinese arts to fill in any gaps I might have in my styles.  As they are in many ways the forerunners of both Karate and Jujitsu(Aikijutsu).  I am looking forward to this seminar.

Next is Iain Abernethy.  I didn't get anywhere near the time I wanted to meet him in Seattle but he is one of those guys whose great attitude is infectious.  Iain seems to have an indomitable attitude.  He is also well published with books like Mental Strength and Bunkai-Jutsu, he was the first author I read that gave me insight into the world of applied martial arts.  I have spent years putting together a lot of the information that seems to have always been common place to Iain.  Iain's style hits very close to home with my martial arts.  His primary Karate style is Wado Ryu and mine Shotokan.  I am certain that to look at them now they may not be what most think of when they talk about those styles but Iain has taken his Karate back to its root function as a real world means of self protection.

Both seminars are going to be worth any investment you might need to make to attend.  If you have to choose one you will have quite a dilemma on your hands.  I will be sure to post more information on this blog and on the Guinn Martial Arts website as I get more details.