Kata Bunkai - Blocks as Strikes and Strikes as Blocks 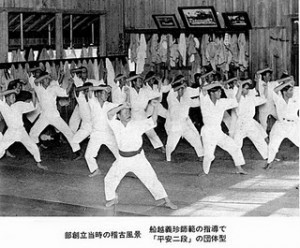 Blocks as Strikes:  Pinan Shodan begins with one of my favorite techniques.  What I have heard called a Box Block or mid level and high level block.  Now one of the applications I had an instructor tell me that this is a defense against an attack performed with a Bo(staff).

I asked about how you could make this functional and they said told me that we should block the attack with the front hand and the back hand is in a high chambered strike.  I didn't really like that answer so I kept my eyes open for a better answer.  That came initially from a Lua instructor names Steve Taylor.

At first I didn't put the technique together with what I was doing in kata.  Thick headed I know but I was working on Lua not Karate so for one reason or another I simply didn't connect the dots.  So the applications in Mr Taylor's Lua class are very fluid and practiced in a much more practical manner than I was used too at the time.  In his class the technique I believe he called a full moon block.   And again, in his class the word block was a bit misused, but as with all things Lua, even the blocks have teeth.

Here is your example.  Mr Taylor got some sticks or a baseball bat and had us practice someone swinging it at us.  We never put a ton of power into the swing but we didn't need too.  We always left class with plenty of bruises and it was great!  Anyway, which side of your body does one want to take a hit with a bat.  Back or Belly?  If you turn your back to the swing you cannot contain the bat once hit.  You have to reach around behind you to get some sort of control over the bat.  Well, that is not going to work very well.  On the other hand if you turn your stomach toward the bat you have a much better chance of gaining control over the bat up front.  Now all this also assumes that you (the intrepid defender) are also going to close the gap on the person swinging the bat at you.  Better to get hit with the handle of the bat than the business end where all the force is located.  Make sense so far?  I really will come up with a video or something as soon as I get a chance.

So, to summarize the defense, stomach toward the bat move in toward the attacker as quickly as possible.  Once close pull the bat in close to gain control and attack back.  Insert kicks, punches, biting or whatever else you want to get the bat away from them.

So going back to the box block.  A very similar defense here.  In this case we will assume that the attacker decides to throw a big looping hook punch.  Common in most bar room fights if you didn't know.  The box shown in the picture above is best if your stomach is toward the attack and you close the gap on your attacker as quickly as possible.  The hand nearest the attacker can strike to the nose, chin, face, neck, etc...  You really don't have to be too particular as to what you hit.  Just hit something.  The high hand forms something of a frame or box near the head to absorb the shock of the punch.  The same movement exists in Aikijutsu, Aikido, Jujitsu, and many others.  All with subtle variations but still.

As you move in to a blocking technique, you also strike your opponent to disrupt their ability to keep fighting.  If only for a moment.

Strikes as Blocks: Now for the same concept applied to a strike.  The lunge punch in Karate is called Oi Zuki.  Now I am using this as an example but the application of this move is just one of many.  All movements in Kata can be interpreted in multiple ways.  Just because this is the one I have chosen doesn't mean that is all there is...

So the idea is this.  We are going to use the lunge punch to close the gap on an attacker again.  This time the attacker can be throwing a kick or a punch in a more linear fashion.  Trying to hit kick us in the stomach.  They could start from far away, say a meter or two or they could be right on top of us.  Inches away.  (Yes I mixed units intentionally, I want to make you people think.)

Anyway, the punch part of the technique can be used to push someone out of balance.  If they are in the middle of an attack it will take the power out of their attack.  It is very difficult to throw a strong attack when someone is off balance.  Of course that also doesn't account for the use of the "chambered hand" also called a Hikite or pulling hand.  I will go over it more in depth soon.  For now it could be used as counter or pulling pressure on someone where the punch could be pushing pressure on the head.  Pull the body in close and push the head away and you have yourself a pretty spiffy and simple takedown.  Make the punch a punch technique at the same moment of the pull and the takedown becomes pretty quick and potentially painful.

Thus your strike blocks their attack indirectly through off balancing the attacker, striking them with force (the teeth I spoke of earlier), and in this case as with the other each moving taking on double duty.  Making it more effective technique in a fight.

Anytime you can solve two problems with the same single technique you place yourself ahead of the game.  Of course, this is a massive simplification and needs to be trained and drilled many many times.