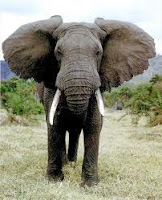 I saw a great post on the Striking Port Blog by Kris Wilder (author of Little Black Book of Violence) and he made a very interesting point.  The gist of his post was that it is useless to simply tell people to "Be aware!"  Aware of what? I admit at some point when I had just started teaching this type of thing I too would tell people to be aware, just as my instructor had told me.  Looking back on this lesson over the years and it really is a useless comment in training.

So to continue Mr. Wilder's post he pointed out that what we really want to be aware of are the aberrations in the normal patterns of the world around us.  The world (society) flow in a certain standard.  Consider, personal space between people or how someone talks to you.  One of DeBecker's (author of Gift of Fear) mentions in his book is that charm is not inherent.  It must be learned.  So if a person is being charming and it gives you the heebie-jeebies then chances are you are right.  There is a change is a non-normal flow in the standard patterns around us.

An extreme example might be a person walking through a crowd that bums into people.  Perhaps even several people.  If you watch even the busiest and most crowded streets everyone moves with a certain pattern.  Very rarely will you see someone move against that flow.  Unless they are a tourist or are breaking pattern for a reason.

So essentially we are not just being aware.  We are watching for something that breaks the routine.  Is flowing against the current or standard pattern of the environment.

Another quick example, people do not stare most of the time.  If someone is staring at you, then this would also be a change in the normal pattern.  Look for the elephant in the room.  With a little practice he will not be hard to spot.
Posted by Nick Guinn at 9:21 AM

Email ThisBlogThis!Share to TwitterShare to FacebookShare to Pinterest
Labels: awareness