Another excellent article from Sue on "My journey to black belt" Blog. I wanted to post a comment but my comment was apparently way to big. So, my comments are at the bottom of this post... 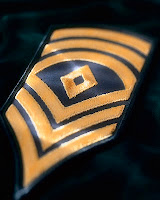 A couple of weeks ago I received a comment to one of my posts in which the commentator SCB said: 'I hear 'time in grade' references; I hear 'syllabus' and other such things that cause me concern as to what black belt means so would like to see you post on that subject, 'What black belt means to me?''.

I think that the subtext behind this comment is what do I think about the concept of a syllabus focused kyu grading system with the acquisition of coloured belts and the coveted black belt?

When I started this blog nearly two years ago I was a purple belt (4th kyu). At that point in my training the idea of ‘journeying to black belt’ seemed like a reasonable target to pursue in a martial art. Isn’t that what every martial artist wants? I then became aware through listening to other more experienced martial artists and through my own personal development that ‘it isn’t about getting a black belt – it’s about the training’.

I have also become aware that many people don't agree with the coloured belt ranking system and prefer a system that observes the more traditional training method whereby students wear a white belt until their sensei deems them proficient enough in the mental and physical aspects of their art to be awarded the black belt. Do I agree with these view points? Err..yes and err..no!

Yes I agree that it’s not just about getting the black belt. I don’t want to follow some watered down syllabus that fast tracks me to shodan. I want to immerse myself more fully in the physical, mental and cultural aspects of martial arts and I need time to do that properly. BUT… I like my brown belt and I liked all the coloured belts I had before – they are markers of my progress, they help me put my new found skills and knowledge into context, they motivate me. They are like mini rewards for the effort I have made. And yes, I want that black belt.

Prior to this a student would train under a master for many years learning only the few techniques and kata that he wanted to teach. After several years a few trusted students may be taught some more dangerous 'hidden techniques'. Many students would train for years with a master, learning only a limited range of techniques and if they left they would have nothing to show for all their efforts. Occasionally the master may issue them with a scroll which listed the techniques they had learnt. It was very difficult for most students to learn a complete system of fighting - only the trusted and dedicated few would achieve this honour. Martial arts had a 'closed shop' mentality.

All this changed with Kano's introduction of the belt ranking system. He extended the white/black belt approach to include a range of coloured belts and introduced the concept of a systematised syllabus that gradually built up from elementary moves to increasingly more difficult concepts as the students skill and knowledge developed. Each stage of the process was marked with awarding the student the next coloured belt. Once all the techniques of the entire syllabus had been learnt the student was awarded the black belt to signify they now knew all the basics of their art.

The advantage of the belt ranking system was that all students now had the opportunity to learn an entire fighting method in a logical and systematised way. Judo had now become an 'open shop' allowing many more students to train. Gichin Funakoshi soon saw the potential of the belt ranking system for karate as he introduced karate to Japan. Adopting the belt system made karate more acceptable to the Japanese government and allowed Funakoshi to propagate it within the Japanese university network. From there it spread to the world.

If you are a critic of the coloured belt ranking system remember that without it Eastern martial arts may never have spread around the world and may still be the preserve of small secretive dojos training only handfuls of students. Instead hundreds of thousands of people around the world are able to participate and enjoy the benefits of learning Eastern martial arts.

However, I accept that the belt ranking system has its drawbacks. It has been abused by many clubs or organisations who have developed a very narrow syllabus that does not teach a complete fighting method. This goes against Kano's original aim of enabling all students to access a complete fighting system. A martial arts system is only going to be as good as its syllabus so if the syllabus is incomplete then so will the resulting martial art be. This does not mean that the principle of the belt grading system is flawed, only the martial arts system that is using it incorrectly.

The other problem of the belt ranking system is that it can focus the student's attention to much on the next grading rather than on the process of training. Again, if this is happening it is the fault of the instructor rather than the belt ranking system. In our club we are not syllabus focused all the time. Many students do not even access their syllabus from the website trusting that through their training they will be taught the things they need to know.

Karate often avoids the pitfalls of being over focused on syllabus by engaging in whole class teaching. In our club, the only time we split into grade groups is to practice kata but even then we often do kata practice as a class - revising more junior kata and trying to copy more senior kata from more senior students. Learning is circular in karate and this is reflected in our syllabus. We are tested on some of the same material every grade - obviously we are expected to perform it at a more proficient level as we progress.

I think the belt ranking system is a positive introduction to martial arts, allowing it to be accessible to a much wider number of students. Any faults that one can level at it are generally faults of its application rather than its principle. It is up to the student to find a club that applies the principle well so that they learn a complete and comprehensive martial art system. The belt ranking system does not mean that the belt is more important than the training - the training will always be the most important thing but students in the junior ranks need external motivators, need structure and order and this is provided by the ranking system. As you become more experienced then motivation internalises more and you become less dependent on rank. This takes experience and wisdom to understand.

I really like the post. I would add that the colored belt system and the adoption of the uniforms in Karate are mentioned in a transcription of notes from a meeting of the Karate Masters in 1936.

People like Chojun Miyagi, Kenwa Mabuni, and many others were all present and discussed these points as a means to classify students so that they could compete. That competition was meant to stimulate the dying art of Karate. As was noted in the meeting, many young men found the competition more interesting in Judo than the self defense aspects of Karate taught to that point. For better or worse here we are...

From a motivational stand point I agree completely that a rank system of some sort needs to be used to show progress. Especially for younger students. Honestly, it doesn't matter what system you use so long as you have the simple components that the existing system offers.

A visual and social award that demonstrates progress toward a goal or goals. A method of organizing the material that needs to be learned in bite sized parts. And those are just for starters.

Example: Imagine getting a college degree where the instructor takes you to a room full of all the textbooks and supplies one would need to complete a college degree and is then told, Good luck. Learn it all and perform all the necessary projects and assignments to complete the degree. With no other instruction than that few might do it. Others would give up before they started.

My favorite quote about a black belt it that it represents one thing. You are now officially...a student of the martial arts. Black belt is little more than an acknowledgment of progress. One more link in the chain. Although this one is a little like coming of age and being allowed to vote or drive. It is a milestone. We will all have the post-black-belt hangover if we go into it thinking that it is the ultimate or end-all. I went into mine having already started cross training into another style and knew full well that this new style was going to take me years more. Thus I never experienced the hangover since I knew I had so much more to learn.

Anyway, I will be adding the Black Belt Paradox to my terms. Very useful.