Here’s something you don’t see every day…

A Chinese man living in Yuxi, Yunnan province, had a knife removed from his head after it had been lodged there for four years…

He suffered from headaches, had difficulty swallowing and so on. He self-medicated for years to live with the pain but eventually, he went to see the doctors. Imagine their surprise when they took an x-ray and saw a knife lodged in his skull… 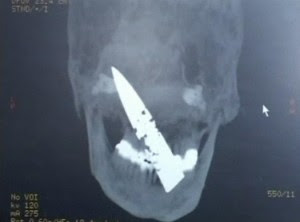 X-ray of the knife inside the Chinese man's head.

Turns out the man fought a robber four years ago and remembered being struck in the jaw during the fight. I guess you could say he was pretty lucky to survive it… But that’s not what I wanted to point out, this is:

The man didn’t even know he got stabbed, let alone have a blade still inside him.

Which only goes to show that fights are unpredictable and things can happen so fast, you don’t know what’s going on until it’s too late. He clearly didn’t see the blade because he never even considered a knife wound as the cause for his medical issues. Had the knife struck a few inches to the side, the Chinese man wouldn’t have survived it. So he got real, real lucky.

This is one of the biggest issues I have with people who claim sports fighting techniques are great for self defense. It’s not that they can’t work in that environment, that’s not the problem because they sure can. But you typically don’t train knife defense when you’ll be fighting in the Octagon, simply because there won’t be a knife-wielding opponent there. And defending from a knife attack is very different from defending against a double leg take down. Which seems common sense to me but apparently it’s not for many devoted combat sports practitioners. Because if you claim otherwise, they say you’re a dumb as brick traditionalist.

The knife, after removal form the man's head.

The weird thing is this: go to any MMA or muay Thai gym and ask if they agree that the way you train will be the way you react. Most of them will agree. Then ask them if you have to train for what happens the most in the Octagon instead of preparing for some sort of traditional art’s concept like fighting on an ancient battlefield. I’m pretty sure they’ll agree again.

But if you then point out that outside the Octagon, people use knives and other weapons, especially the criminals who are most likely to attack you, they don’t see the disconnect: sports fighting is not self-defense because it doesn’t address what happens most in real-life violence. It’s similar, I absolutely agree with that. But the differences are just as important as the similarities (Thank you Randy!) and it’s the differences (he’s unarmed vs. he has a knife) that can get you killed.

“Yeah but how about defending against unarmed attacks?! MMA is the shit for that!!!”

I don’t think that’s true but I’ll not dispute that sports fighting can be devastating in unarmed self-defense situations. Being able to punch, kick, knee, throw, etc. with a lot of speed and power is a crucial skill to have there. But here’s the rub:

Just like with our poor Chinese man here, you might only find out weapons are involved when it’s too late to do anything about it. Chances are, you won’t be as lucky as him so perhaps it’s not the best idea to count on luck here and prepare accordingly.